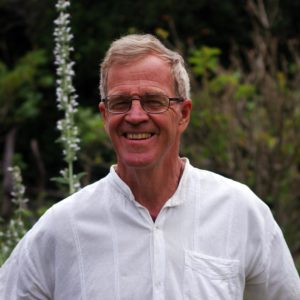 Walter was born in the jungles of Borneo in 1949 of Dutch parents. As a youth, his family lived in Malaysia and England and finally, when he was 9, in New Zealand. By the end of high school, he knew he wanted to be a farmer and began his life’s path. Walter soon realized that conventional farming fought nature instead of working with her so he left New Zealand in 1972 to learn biodynamic farming, which works intimately with nature. Most of his adult life he lived in the U.S. working on Camphill community farms or his own farms. In 2007, he and his wife Susan moved to the beautiful mountains of Ecuador. Here they are helping to create a community on land that the indigenous Kogi from Columbia designated sacred.

Over the years, to add value to his farm products, he made Gouda cheese, European sourdough breads, grew vegetables and helped launch Seven Stars Yogurt. For many years he was on the Demeter Certification Board that certifies biodynamic farms.

In 2001 he met and married Susan Davis and they have been weaving their work together ever since. Through Susan’s Capital Missions Company, they co-created a successful KINS Innovation Network called Kindred Spirits. This network invited social investors and philanthropists to visit their farm to learn how non-farmers can steward the Earth.

In 2007, they began living in Vilcabamba, Ecuador, for a substantial part of the year. Here Walter wrote his book A Farmer’s Love, and he and Susan started giving workshops on their beautiful farm in the mountains of Ecuador.

Two passions guide Walter’s life. One is to grow the healthiest food possible by farming Biodynamically, thus treating the Earth with respect and love. The second is to help non-farmers learn the importance of nutrition in the food we eat, learn how everyone can help steward the Earth and, last, learn how to connect to the spirituality of the Earth.